It was the last Thursday in June 2013 and my eldest daughter had just left for America.

By now I was well used to getting calls from withheld numbers so I answered the phone as soon as it rang.

It was Dr C from Bristol Children’s Hospital and I instantly knew by the tone of his voice that something was wrong. He said “We have completed Leah’s gene sequencing and discovered that she has a GATA2 genetic mutation that can cause a familial type of myelodysplasia.”

He went on to explain that the next step would be to test Leah’s brother (the hospital already had samples of his blood suitable for this) to see if he was carrying the gene. If he was found to be carrying the same genetic defect, then his bone marrow could not be used and Leah’s transplant would have to be postponed until a suitable match could be found from the world wide registry.

Dr C said there was several types of GATA2 gene mutations and the type found in Leah’s blood (p.Thr354Met) had never been seen in the UK before. My husband and I also needed gene testing as a matter of urgency.

Depending on which of us tested positive, then they would know who else in the extended family would also need testing. An appointment was made for us to see the geneticist in Belfast on the following Monday.

My world was spinning out of control and I was struggling to breathe.

I thought I already knew how bad this could get.

I had only recently begun sleeping through the night again since Leah’s original diagnosis in April. My concentration and attention span had almost returned to normal.

Now I could once again feel the physical symptoms of shock seep through my body.

Did this mean that more than one of our four children could have a ticking time bomb inside their body?

Would we have more than one child needing a bone marrow transplant?

Would Leah ever make it to transplant?

I needed to rein in these thoughts and focus.

I asked Dr C if he had informed our hospital consultant in Belfast about this latest development and he replied that he had an email ready to send to him but he wanted to discuss it with me first before informing him.

Dr C said that we would know whether our son or ourselves were carrying this genetic defect by the end of the following week.

When we had our first outpatient appointment in Bristol, Dr C had discussed with us some possible genetic implications of Leah’s situation and had put in a referral to the geneticist in Belfast.

I hadn’t really liked the sound of this and had secretly hoped that it would be many months before we found ourselves face to face with a geneticist, listening to potentially more bad news.

Now here it was and I was scared.

I was also relieved, that in the light of what we now knew, that we didn’t have long to wait for further clarification.

Overall, the NHS has been very good to us.

As soon as I got off the phone Leah was by my side “What did he say?”

She never missed a thing.

I had left the room to take the call but she had heard me say hello to Dr C. I tried to take the sting out of the news as I repeated the information to her, I tried very hard not to sound like I was in acute inner turmoil.

I explained about genetics and patterns of inheritance and stressed that it was really important not to speak too freely about this until we knew what we were working with.

I said that I understood that she needed emotional support and advised her to choose a small number of close friends whom she could trust, and to confide in them and get them to pray for and with her.

I really wished that I didn’t have to tell my 15 year old daughter about any of this stuff, but the geneticists appointment on Monday was for her, as well as for my husband and myself.

As always Leah appeared to deal calmly with the information. 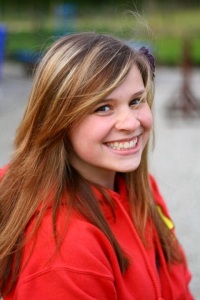 On Friday (the next day) our haematology consultant in Belfast City Hospital phoned me. He asked me how I was coping.

I said that I was quite stressed, but that I knew that he and Dr C were excellent doctors and that Leah was in good hands. I also told him that no matter what lay ahead for us as a family, that God would give us strength for the journey. His genuine kindness and concern were very evident.

Saturday morning I was feeling so crushed, defeated and devastated that I just didn’t know how I could possibly keep going.

I halfheartedly opened the STREAMS IN THE DESERT App on my phone that I used every day and read this re Numbers 13:33 – they saw the giants but Caleb and Joshua saw God. Those who doubt say “we can’t do this” but those who believe say “let us go on……for we are well able”

It was the most appropriate word of encouragement I could possibly have received.

One of the constant challenges for me in all of this has been the question “Do I really believe what I say I believe?”

If I truly believe in a God of love then what is there to fear?

Realistically speaking though, one of the big problems is the emotional roller coaster you step onto when a life threatening illness enters your life.

You think you know what life is all about then wham! the roller coaster takes a nose dive and none of your existing strategies or coping mechanisms are anywhere near enough to get you through this new phase in your life.

With each new development along the way you have to learn new coping strategies.

When the roller coaster stops for awhile you might even think that things really aren’t all that bad, but suddenly and with no prior warning the roller coaster car takes off again at breakneck speed and this time the dips are steeper and the rails seem thinner and there’s even a few loop the loops and once again you ask yourself “Am I able for this?”

Monday came and the three of us headed out on the by now all too familiar 70 mile journey to Belfast City Hospital.

The geneticist turned out to be pleasant, friendly and easy to talk to.

He told us that GATA2 mutations are inherited in an autosomal dominant way, so if either Horace or I tested positive then the siblings of whichever one of us tested positive would be considered for genetic testing also. If one of our siblings tested positive, then their children could possibly have inherited the genetic defect too. The best case scenario would be for both Horace and I to test negative.

He also said that someone could have the genetic defect and not develop myelodysplasia, although they could develop other disorders associated with GATA2 mutations.

We asked about Leah’s eggs that had been harvested and he said that her eggs had a 1 in 2 chance of being affected by this genetic mutation and when the time came for Leah to need them she could be referred to Guys Hospital in London for pre implantation genetic diagnosis.

On Friday 5th July @ 10.30am Dr C phoned us with the good news that the Horace, myself and Simon were clear of the GATA2 genetic defect. He said that this meant that Leah’s genetic defect was “de novo” i.e. this was the first time that it had occurred in our family.

I was so relieved to hear this news that I was scarcely capable of coherent conversation. Once again I felt weak and on the point of collapsing, but this time it was for happy reasons.

It was such very welcome news.

The roller coaster car that I was travelling in, glided temporarily into a lay-by.

One thought on “GATA2 genetic mutation”