Thursday 26 Dec ’13 had that lovely after Christmas relaxed feel to it.

I had been a little concerned about Leah earlier in the day because she seemed a bit breathless.

I had checked her temperature with two different thermometers and both had given a normal reading.

Leah had got a Nintendo Wii for Christmas and now she and her younger sister were down in Leah’s room playing on the Wii, laughing and carrying on.

Later in the evening Leah came up and proceeded to cook one of her specialties for herself and her sister – a yummy cheese omelette.

I was glad to see there was nothing wrong with her appetite.

Friday morning @ 8.30am as per usual, we set off on our 140 mile round trip for the Bridgewater Suite at Belfast City Hospital.

The only difference on this occasion was that Leah was booked for an ultrasound of her abdomen and pelvis at 10.50am.

This meant she wasn’t allowed any breakfast but she needed to drink a significant quantity of clear fluids approximately one hour beforehand.

Leah settled down to doze in the car with her earphones in her ears, listening to music.

She asked me to wake her up when it was time to start drinking the water.

I did this, but shortly after she had started drinking, while I was driving on the motorway, Leah started vomiting and it seemed like she wouldn’t stop.

When there was absolutely nothing left in Leah’s stomach, the vomiting stopped.

I kept driving and suggested that the best idea would be to go straight to Rachel’s flat in Belfast where Leah could get cleaned up and borrow some clothes.

We would still be able to get to the hospital in time for her ultrasound, as this test was important.

Thankfully there was very little traffic and we made good time.

At Rachel’s flat, Leah seemed weak and needed me to to help her quite a bit.

She insisted that she wasn’t sick but said that drinking the water too fast had upset her stomach.

We got to the hospital in time and everywhere was so quiet, unlike a normal busy Friday.

We were in and out of the ultrasound dept in no time.

Then I headed in the direction of the cafe to buy the buns that were our usual weekly treat.

Leah didn’t want any buns – this was very unusual – Leah loved her food.

I said that she must be sick but she insisted that she wasn’t and again said that the water had “turned her stomach”.

I reflected silently on the fact that later that day we were scheduled to go to Donegal for our first big family get together since Leah’s bone marrow transplant.

Leah had been looking forward to this event for weeks and would not want ANYTHING to get in the way.

I said nothing – the doctor would decide if Leah was well or otherwise.

On the Bridgewater Suite we had the luxury of a private ensuite room for our day’s visit.

Leah and I chatted & laughed together about this & that.

She looked well, but refused all food when the lunch trolley came round.

I noticed that her breathing was very rapid – I discretely timed it using the big wall clock above her head and noted that her respirations were 40 per minute – not good I thought.

Our consultant came to see us and sent Leah – on foot – for a chest X-ray.

Halfway down the corridor I noticed how breathless she was getting and I was quite shocked and worried.

By the time we had walked back to our room again, an emergency CT scan of her lungs had been ordered and Leah was whisked away in a wheelchair.

I didn’t need to see the scan results to know we were in bother – the shocked expression on our consultant’s face told me that.

He called me over to the computer screen to look at an image of Leah’s lungs “Jeepers, no point showing me.” was my initial reaction but I caught my breath as I looked at the images – Leah was in bother alright – her lungs were filled with “consolidation“…….. as the doctor said “she’s far sicker than she looks“.

By now various other family members had arrived downstairs in the hospital, as some of them had been planning to travel with us to the family party.

Leah’s boyfriend Nic and his Mum Kerry had arrived too on their way back from England.

My head was spinning trying to make sense of who was going where.

Rachel left with my sister and the car. Nic went into Leah. I sat with Kerry as I tried to process all that was happening.

Thankfully I always carried an emergency overnight bag on these occasions.

Leah was admitted to a single room in the Cancer Centre.

I wish they would call it something more imaginative than “The Cancer Centre” – do we have to be reminded of the “C” word all the time?

Leah and I settled into yet another new environment.

The staff brought me a folding camp bed.

I’m a good sleeper and well used to sleeping in a hospital environment but this times was different – I was too scared to go to sleep.

Never once in 14 weeks in Bristol Children’s Hospital was I scared to go to sleep as I knew that Leah, no matter how ill she was, could give me a dig if she needed me.

This occasion was different, Leah seemed to be deteriorating so fast.

Between 9pm Friday night & 9am Saturday morning the ward staff sent for the doctor on call, on three different occasions, because they were so concerned about Leah’s medical condition – everything was happening too fast.

At 4am Saturday morning Leah was started on oxygen via nasal prongs, but as I lay on my camp bed listening, I couldn’t detect any significant improvement in Leah’s breathing after she started using the oxygen – this wasn’t a good sign.

By morning Leah was too breathless to even walk from her bed to the ensuite facilities in her room.

Later in the morning the ICU team were called to come and assess Leah but they said she wasn’t sick enough to need ICU at that stage.

At midday Nic arrived to spend the day with Leah.

After a while I went to a nearby coffee shop with a friend to give Nic and Leah some space.

A little while later Nic phoned me to say that I needed to come back because Leah had deteriorated further and would shortly be transferred to ICU.

Leah was never again well enough to have a proper conversation that didn’t involve typing on her iPad.

I’m so glad that we were able to have Christmas 2013 together as a family of six. 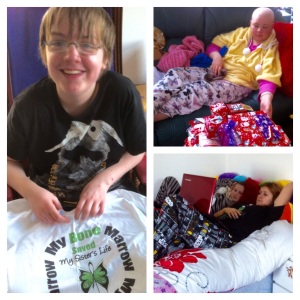 Unauthorized use and/or duplication of this material without express and written permission from this blog’s author and/or owner is strictly prohibited. Excerpts and links may be used, provided that full and clear credit is given to Victoria Whyte with appropriate and specific direction to the original content.
Loading Comments...
Comment
×
%d bloggers like this: