Anyone who knows Leah, knows that Girl’s Brigade was an important part of her life. This means that for me, all Girl’s Brigade events are tinged with sadness.

Earlier this week I took part in the annual display of Ballykelly Girl’s Brigade, where I help with the Explorer’s Section.

Then tonight I represented Ballykelly GB by attending the annual display of 2nd Limavady Girl’s Brigade. It was a very enjoyable evening – a lot of hard work goes into these annual displays. Some parts made me laugh – I especially liked their pink panther sketch. Some parts left me in tears, but that of course was completely unintentional on their part.

At the end of April I plan to attend the Girl’s Brigade display, of the Kilfennan 320th Girl’s Brigade Company, which our youngest daughter attends. This is the GB Company that Leah belonged to, from she was three years old. 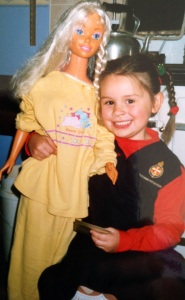 Leah participated in their display every year, including in April 2013, six days after she had received her diagnosis of myelodysplasia with monosomy 7.

My favourite memory of Leah taking part in the annual GB display, is the part at the end which is called “the finale”. This is where the older girls usually sing a medley of modern praise and worship songs.

Leah always sang with a smile on her face and sang earnestly, like she meant every word. That image is indelibly imprinted on my mind and always resurfaces when I hear certain songs.

This year at the Kilfennan display, Leah’s peers will receive their “Queen’s Award”.

In the Spring of 2013 Leah filled in the paperwork to commence working towards her Queen’s Award. On the 10th April 2013, a group of girls from Kilfennan GB (including Leah) travelled to Ballymena for an Induction Evening to learn more about working for their Queen’s Award.

On the 29th May 2013 Leah sent the following email to the administrator at Girl’s Brigade Headquarters N.I.:

Unfortunately due to being diagnosed with cancer I have to defer Queens Award for a year. However I hope to pick up again next year when all my treatment is complete and I’ve recovered, thank you for giving me the opportunity to be a part of Queens Award 🙂

Leah composed the email herself and I remember thinking at the time that the person receiving it would probably be quite shocked. I didn’t voice my thoughts however, I just told Leah that it was nicely worded.

Now however, I can’t even read it without crying. Leah’s wording seems so simple, yet so profound.

So matter of fact, with no trace of self pity.

Leah takes nothing for granted, just says that she HOPES to be well enough to resume working towards her Queen’s Award in the future.

As always with Leah, she expresses her thanks and appreciation.

As Leah’s friend states in her guest blog – That’s who Leah was.