Christmas – the time of year that most bereaved people dread. With its emphasis on family life, traditions and togetherness, the bereaved feel the loss of their loved one more keenly than ever and the empty chair is at it’s most conspicuous. For those whose loved one became ill and/or died around Christmas – well, it’s even harder.

Christmas has been evident in the shops for quite a while now but it was partly camouflaged by the Halloween stuff. Now that Halloween is over, there is no holding back – the commercialised side of Christmas is in full swing.

I went into my local Chemist today to collect a prescription and was confronted by all their Christmas stock – the tears started to sting my eyes. Leah loved Christmas, she would have loved looking through all the gift sets on display, selecting gifts for friends and family.

I was unfortunately a captive audience in the Chemist today, due to having to wait for the prescription. My emotional distress started to escalate.

The sales assistant was pleasant and friendly. She suggested that myself and another customer try out some perfume samples while we were waiting. This was just too much for me, Leah loved perfume.

There was a delay on the prescription so I excused myself and headed for the privacy of my car, pulling up my hood as I walked, to shield my tear stained face from passers by.

Last Christmas the Northern Ireland Cancer Fund for Children gave us tickets for our whole family to go and see Peter Pan in the Millennium Forum in Derry.

We had to get special permission from Leah’s consultant for her to be allowed to attend, thankfully he said yes. Now that the children are older (aged 10 – 19yrs at that time) it was relatively unusual for all six of us to do something together away from the house.

Miriam, our 10 year old, was particularly excited. On the way there she said “Mummy, is this the way it’s going to be from now on? Are the six of us going to be doing more things together as a family?” I replied happily “Yes, that’s right.”

During our 14 weeks in Bristol, Leah and I had missed our family so much, that family togetherness was now even more precious than it had already been. That pantomime turned out to be the last thing that the six of us went to together.

We arrived a bit early because my husband dropped us at the door and then went off to park the car. This explains the empty seats and the preoccupation with mobile phones!! 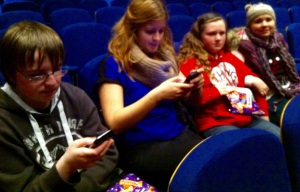 There were other families at the Pantomime also who were battling childhood cancer. During the interval I was chatting to another family, their wee boy was called Niall. He sadly lost his battle with the illness in April ’14.

I think it’s fantastic that charities like the Northern Ireland Cancer Fund for Children help families like us to make happy memories with our ill children, when things like pantomimes are the last things on our minds.

Two weeks before Christmas my sister-in-law asked if any of us wanted tickets for the community carol service in the Arts & Cultural Centre in Limavady on Monday 23rd December. I said no, thinking that Leah was too unwell to attend, but of course you couldn’t keep her down ( or in) – it turned out to be the last function that Leah ever attended.

Leah really enjoyed attending that Carol Service and I’m so glad that she went. Her sister brought her home but by the time they got to the house, Leah was crying with the pain from her spinal fracture. Earlier that month an X-ray of Leah’s thoracic spine had shown a small spontaneous infracture between T6 & T8. Leah was at times totally incapacitated by the levels of pain that she was experiencing. We were told that this level of pain could not be explained by such a tiny fracture.

On Friday 27th December Leah became very unwell and had an emergency CT scan of her lungs which resulted in her being admitted to the Cancer Centre at Belfast City Hospital. On Saturday morning 28th December Leah was crying with the pain in her back and the nurses and physiotherapist on the ward in the Cancer Centre expressed surprise when I informed them of her spinal fracture.

Leah’s breathing deteriorated on Saturday afternoon and she was transferred to ICU and became critically ill. The next day (Sunday) our haematologist informed me that the CT scan that Leah had done on the Friday showed that it wasn’t just a “small infracture” of the spine that Leah had but a “wedge compression fracture” between T6 & T8. This explained the degree of pain that she had been experiencing. I was devastated when he told me this, thinking about my beloved daughter and her broken body, thinking about how she had smiled and kept going through so much pain.

Leah’s spontaneous spinal fracture is the one symptom that no one has never been able to adequately explain. She was a fit and healthy girl – other than her diagnosis – before her treatment started in July ’13. She was only on steroids for three months. Leah was already off steroids by the time she had the first X-ray that diagnosed the fracture initially in early December.

One of our consultants told me that if Leah had lived, she would likely have gone on to develop problems with her hips and knees as well. He said that she would possibly have faced a lifetime of hip and knee replacements.

I’m terrified of when some “unknowing” person uses that Northern Irish phrase and says to me “Any word of Christmas with you?” I will just feel like bursting into tears, but if I’m at work I shall have to smile sweetly and respond appropriately.

Yet, I have to remember that the God who has got me this far isn’t about to abandon me now.

I have to remember that the many precious promises in God’s word are for the hard times, not just the easy times. Verses like:

2 Peter 1:3
His divine power has given us EVERYTHING we need for a godly life through our knowledge of Him who called us by His own glory and goodness.

Psalm 23:1
The Lord is my Shepherd I shall NOT want

Philippians 4:19 (KJV)
But my God shall supply ALL your need according to His riches in glory by Christ Jesus.

Sometimes we have to just hold on by the tips of our fingernails.

This is a song that a good friend introduced me to recently – listening to it brings me a lot of comfort.

MY TROUBLED SOUL, why so weighed down?
You were not made to bear this heavy load
Cast all your burdens, upon the Lord
Jesus cares, He cares for you

Jesus cares, He cares for you
And all your worrying
Won’t help you make it through
Cast all your burdens upon the Lord
And trust again in the promise of His Love

Chorus
I will Praise the mighty name of Jesus
Praise the Lord, the lifter of my head
Praise the Rock of my Salvation
All my days are in His faithful hands