On the 1st of December I came across this set of 25 downloadable notecards  by Ann Voskamp, extracted from her popular book The Greatest Gift. There’s one for every day this month, up to and including Christmas Day.

Ann Voskamp is also the author of the bestseller One Thousand Gifts: A Dare to Live Fully Right Where You Are

which spent sixty weeks on the New York Times Bestseller’s List. I write about my experience of reading ‘One Thousand Gifts’ here.

I’m not sure if any month of the year is particularly easy since Leah died, but December, with its extra emphasis on communal happiness and family togetherness, is especially difficult.

This year, December brings with it the second anniversary of Leah’s final hospitalisation on the 27th December and her eighteenth birthday on New Year’s Eve.

I find that these little thoughts for Advent by Ann Voskamp are just enough to catch my attention and to hold in my head – they are neither too long nor too short. They help me to remember that Christmas is Jesus’ birthday – something that meant a great deal to Leah. Read this blog to find out more about one of her favourite Christmas songs.

I was shopping today – something that I’ve consistently struggled with since Leah died, as she loved shopping so much and was my frequent companion on shopping trips. 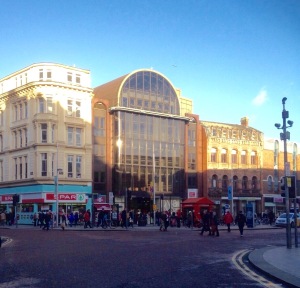 I was shopping in Belfast, the place where Leah and I spent so much time together while attending hospital appointments. Today, when I bought something to put on her grave on her 18th birthday, my tears started to fall once again.

However as I sobbed quietly, I told myself that this wouldn’t be the day when I would lose myself in sadness. I let the tears fall as I walked with my head bowed through the hordes of Christmas shoppers.

I remembered something of what I had read much earlier today. As I walked I gave thanks for the lives of each one of our four children – including the one whose life was cut short, the one who was only given to us on loan.

I prayed and talked quietly to God in my heart and I felt His comfort.

One year and one month – that’s how long it’s been.

People have stopped saying “At least you’ve all the firsts over you now.”

I know people meant well and I definitely would rather people said something rather than nothing, but I never quite knew how to respond to that one.

Was I supposed to feel some sense of achievement?

I don’t want anything to be “over me” that increases the distance I feel between me and my daughter.

As time moves on it poses other problems too:

I’m there to support these families and to hear their story, not for them to hear mine.

In 7 weeks time my 15 year old will become 16 – what do I tell people then? How do I bluff that one without lying, or making things even more complicated?

Even though it’s been 13 months, the wounds of grief are far from healed, they have a thin scab on top. It takes very little to dislodge that scab and cause those wounds to become raw and bleeding once more.

In church last Sunday I was feeling quite composed, not particularly emotional, none of the hymns that had been sung so far had any particular association with Leah or her illness journey.

Then, while the offering was being lifted, photos of the previous weekend’s Youth Fellowship Residential scrolled on the screen at the front of the church.

Unconsciously, my eyes searched for Leah amongst the photos of the young people, then my heart broke afresh because she wasn’t there.

My husband’s hand gripped my arm, he was crying too.

Like so many other Sunday’s that I’ve sat sobbing in church, I wanted to leave, to escape, to run away, but I forced myself to stay in my seat.

I fear that if I ever get up and walk out, that I will never ever come back.

Not because I’ve fallen out with God – certainly not – but because I would have given in and let the pain have the upper hand.

It would be the easiest thing to do – some times I want to just give in to the pain and let it consume me.

However I’m trying really hard to shift my focus off the pain that threatens at times to consume.

I’m reading a book by Ann Voskamp called One Thousand Gifts: A Dare to Live Fully Right Where You Are.

Before Leah became ill, reading was one of my favourite activities.

Unfortunately, since Leah became ill and died, I’ve really struggled with my concentration and attention span, so reading a book now takes huge amounts of will power.

Ann Voskamp writes in very flowery, poetic language which I have found to be something of an “acquired taste”. I prefer a more direct, down to earth style.

Having said all of that, her book is very good and I’m learning a lot from her.

Ann suffered many adverse experiences in life including witnessing her little sister being knocked down and killed by a truck. She has struggled emotionally, but she eventually learned the importance of giving thanks to God for the many good things that we have in our lives.

This book really is about so much more than this, it’s also about finding God in the everyday moments of our daily lives.

There’s a free app (sadly only for Apple devices like the iPhone or iPad) that you can download and use as an online diary to record all the things that you’re thankful for. You can write in the app and use it to take photos.

It’s helping me to count my blessings, big and small.