This morning as I sat having my Devotional Time, I looked up and there across the room I saw it – the beautiful miniature Christmas Tree that Esther Scobie had made us for what would be Leah’s last Christmas. My youngest had decorated the room after I went to bed last night! Little did any of us know in December 2013 that it would also be Esther’s last Christmas.

Tears spilled down my cheeks as I remembered the many thoughtful cards and notes that I received from Esther over the years, but especially during Leah’s illness. It is so hard to say goodbye to the special people in our lives.

Philippians 1:3
“I thank my God upon every remembrance of you”

For those of you who are wondering – yes we have put up a Christmas tree and decorations this year. When I say ‘we’, I mean the kids – they did it all.

The crib figures are older than me – they were passed down to me from my parents. When I was growing up, the baby Jesus NEVER went in until midnight on Christmas Eve. I remember as a child, the manger lying empty the days leading up to Christmas, then getting up on Christmas morning and finding Jesus lying in the manger.

In pride of place on our mantelpiece is this beautiful Christmas Tree, hand made by a very dear friend called Esther Scobie.

Esther’s contributions used to be amazing in our Bible study meetings. Everything she said was so relevant and meaningful. I shared a lot of personal stuff  with Esther too, she always seemed so understanding.

Esther never lost the traditional art of letter writing. Over the years I received many cards from Esther, each containing welcome words of encouragement.

During Leah’s illness and especially during our time in Bristol, Esther was one of many dear friends who faithfully sent us cards and letters. Leah and I were the envy of the other residents of Sam’s House in Bristol, because the majority of the daily post used to be for us. 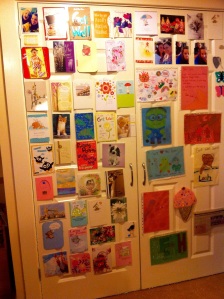 Esther’s cards were often accompanied by gifts as well. Her kindness and that of so many others, made our journey a little bit easier. Here is one of Esther’s lovely cards that we received. 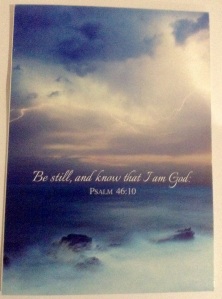 Sadly, in April 2014 Esther went to be with the Lord, after going into hospital for a surgical procedure. So many of us mourn her loss, along with her heartbroken family.

“How lucky am I to have something that makes saying goodbye so hard.”

Thank you Lord, for a friendship so dear that loosing it is so hard.

Esther is not the only dear friend whom we have said goodbye to since Leah died, sometimes it’s hard to even process it all.

I’m so glad for the beautiful handmade little Christmas Tree that adorns our mantelpiece and reminds us of what a blessing Esther was in our lives.

I thank God for the many friends with whom He has blessed us on this journey – we couldn’t do this on our own. 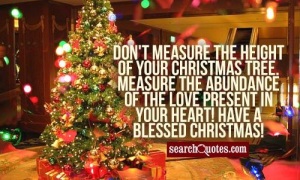