As most of you already know, Leah’s first blood test was on her fifteenth birthday – New Year’s Eve 2012. She died 16th January 2014. Her illness spanned one year and sixteen days.

In effect, this means that every month contains some kind of ‘anniversary’ – these ‘hidden anniversaries’ vary in terms of painful intensity. I try hard not to dwell constantly on the past or ‘wallow’ in negativity, but some dates and events are so traumatic that they are very deeply etched into my brain.

Sadly, today is one of those dates, one of the many days that I wish I could erase from my personal history because it continues to feel so very painful. Three years ago today I answered a ‘withheld call’ and grappled to process the very unwelcome information that the stranger at the other end spewed in my ear. While I was conversing with this doctor, Leah, quiet and dignified, sat beside me and did an internet search of ‘myelodysplasia’ and ‘bone marrow transplant’ on her smartphone.

I did an internet search today to see what kind of information Leah might have been confronted with that day as she ‘googled’ while the doctor and I talked. The first article that came up was this one that states ‘Myelodysplasia syndrome is rare in childhood, and most children have a rapidly progressive course.’ The second one states that: ‘The disease is most common in adults, especially elderly people, and the course varies, ranging from an acute, rapidly fatal illness to a chronic, indolent illness.’ and ‘Infection, rather than progression to AML, ultimately results in the demise of most patients with MDS.‘ I had to stop there as I could no longer see through my tears.

Six days later, on Thursday 25th April 2013, Leah participated enthusiastically in her annual Girl’s Brigade display, just like she had done every year since she was three years old.

I’m told that hospital consultants ( and other senior staff) attend training sessions on how to break bad news to patients. To this day, it remains incomprehensible to me that anyone would think that it’s ‘acceptable practice’ to call a parent who you have never met and deliver such devastating news to a mother and child over the phone on a Friday afternoon.

Here is a portion of what I wrote in my journal later that day: 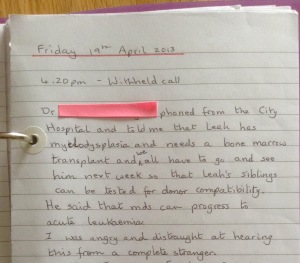 I did not ‘google’ anything at that stage – I was scared and I didn’t want to know. It was Sunday night before I became aware of how much Leah already knew. I then asked her to show me what she had been reading online and we talked about it together.

I never imagined that anyone but me would ever glimpse some of my journal entries or that a day would come when I would share my thoughts and feelings as openly as I do now. However, writing is therapy. I derive enormous comfort and encouragement from following the blogs of other bereaved parents and some who have been bereaved in other ways. Not in a voyeuristic sense of course, it just helps to know that I’m not alone and that I’m not going crazy.

I follow several blogs of people with a Christian faith and I also follow some blogs that aren’t written from a faith perspective. Sometimes I have the time to read all the blogs that I follow, other times I don’t and I periodically do a ‘catch-up’.

A blog that I have recently started following and that is really blessing me is called  thelifeididntchoose (Walking in the Valley of the Shadow of Death). Melanie writes regularly and her posts are reasonably short and they are easy to understand. She writes from a faith perspective and she is authentic and real about how difficult this road is that we walk on as bereaved parents.

This morning as I sought strength to face yet another ‘hidden anniversary’ I clicked on  Melanie’s blog post from Thursday 14th April 2016. I knew immediately that it was God’s word for me in my situation. She quotes from a book by Nicholas P. Wolterstorff entitled Lament for a Son

If sympathy for the world’s wounds is not enlarged by our anguish, if love for those around us is not expanded, if gratitude for what is good does not flame up, if insight is not deepened, if commitment to what is important is not strengthened, if aching for a new day is not intensified, if hope is weakened and faith diminished, if from the experience of death comes nothing good, then death has won. Then death, be proud.

So I shall struggle to live the reality of Christ’s rising and death’s dying. In my living, my son’s dying will not be the last word. But as I rise up, I bear the wounds of his death. My rising does not remove them. They mark me. If you want to know who I am, put your hand in.

~Nicholas Wolterstorff, Lament for a Son

I read these words and thought “Yes, that just about sums up how I feel, both the positive and the negative!”