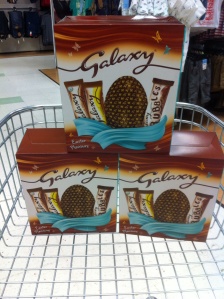 On Monday 25th March ’13 Leah had her first bone marrow biopsy in the Royal Belfast Hospital for Sick Children. This subsequently resulted in her diagnosis of myelodysplasia with monosomy 7. Leah was accompanied to the Royal by my husband, his brother in law & his two sisters. I went to my work that day as I said that I would never set foot in the world of paediatric oncology/haematology unless I absolutely had to. I couldn’t bear the thought of seeing children with chemotherapy hair loss and nasogastric tubes.

One year later I’m in Tesco’s buying THREE Easter Eggs instead of the four that I’ve been buying since our youngest child was a toddler. I never imagined that something as simple as buying chocolate could precipitate so much emotion.