After a loved one dies there are some tasks that have to be attended to right away, such as registering the death, choosing a coffin, planning the funeral service, hosting a wake, – some of these depend on one’s cultural and religious traditions of course. With other tasks there is more choice and flexibility as to when we tackle them, such as sorting through a loved ones belongings and personal effects. This is very much an individual decision and the ‘right time’ varies greatly from person to person. For us it was important that Leah’s cousins and friends could have ‘a little piece of Leah’ so from quite early on we gave away some of her personal possessions.

However, it was only last week that I found myself able to clear out the drawer that contained all of her medication. There was a part of me that still couldn’t believe that Leah had ever become so ill – it just seemed like a bad dream. I would periodically open her medication drawer and stare in disbelief at its contents – had this really become part of the story of Leah’s life? Last Saturday I finally took all of her injections and tablets to our local pharmacy for safe disposal.

However all of Leah’s GCSE coursework still remains untouched underneath her desk.

Today I tackled a task that I had known for quite some time needed to be addressed, but I just could not find the emotional energy to do so. Since shortly after Leah died, two of the three shelves in the bookcase in our Family Room have been completely occupied by two large baskets overflowing with sympathy cards, two books of condolences, Leah’s death certificate and other similar items.

For weeks after Leah died, the postman arrived every day with a stack of cards, held together by an elastic band. It seems like everybody we had ever met, from our childhood to the present day, took time out of their busy lives to write and let us know how much they cared about the passing of our beloved daughter. We even received some beautiful cards and heartfelt messages from people whom we had never met but who had heard of our sad loss. The owners of the local pub (which we did not frequent) took up a collection from their customers in Leah’s memory and a card came from them containing a gift of £220 for the Children’s Hospice. The kindness and thoughtfulness of friends and strangers meant so much to us in our devastation.

We received cards from Christians, Muslims and atheists, from people with a deep faith and people with no faith, but each one was beautifully written with words that came straight from the heart. We received thoughtfully written cards from politicians on both sides of the political divide and even a few beautifully crafted handmade cards. Some of the most touching messages to read were those written by teachers who had taught Leah at school. 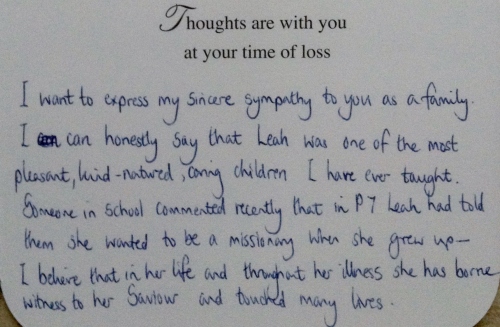 I had no idea that there were so many beautiful sympathy cards out there and I was very touched by the efforts that people went to in choosing them and in thinking of what to write. Some people enclosed handwritten letters with carefully chosen words, others underlined the words on the cards that they had so thoughtfully chosen for us. Some of you never sent your cards, I know that because when I met you in the street you said things like “I have a card for you sitting on my kitchen table, but……” and I finished the sentence for you by suggesting “but you don’t know what to write?” You looked relieved when I offered this explanation and I asked for a hug instead.

Today I went through every item, read it, appreciated the love with which each card was sent to us and then put them all away into a large storage box.

I consulted with my youngest daughter as to what should occupy these two shelves in the Family Room instead. She suggested that we put each child’s Baby Book and their baby photo albums there, so that when we are together as a family we can remember the many happy times that we have all shared over the years. That is what so many of your cards have urged us to do ~ treasure the memories.

This was a poem that we received from the Children’s Hospice. I especially like the lines:

Cherish all the memories

Although we cherish our memories greatly from when Leah was with us, time does not stand still and we have to live on and make new memories too.