I know that I’ve already posted a link in my blog to a “Fifteens” recipe, but I’ve often thought how much fun it would be, to post my own recipe, for the benefit of those who weren’t born and reared in Northern Ireland.

Leah and I used to make these together in Sam’s House when we were in Bristol and everybody loved them. I write about Leah’s Bristol baking sessions here and here.

Of course, everyone knows that the ability to make “Fifteens” is part of the birthright of those born in the “six counties” and in some of the neighbouring counties too. These simple to make and tasty treats are served at almost every social occasion here: birthday parties, coffee mornings, christenings, church functions, and wakes etc etc.

They are traditionally made with cherries, but Leah didn’t like cherries, so we make ours with chocolate chips.

First assemble all the required ingredients.

Then crush the digestive biscuits. I usually do this by placing them inside a clean plastic bag and hammering them with a rolling pin.

Children and spouses can generally be persuaded to help with this part.

Then place all the ingredients except the coconut in a bowl and mix thoroughly with a spoon.

Shake some coconut on a clean worktop and place the mixture on top. 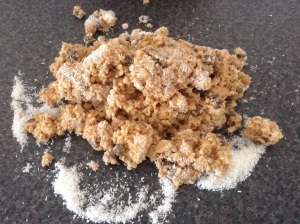 Use your hands to gather the mixture into a sausage shape, rolling it in the coconut as you do so.

Place on a tray in the fridge for a few hours, or overnight, until it’s firm.

Then cut them into slices approximately 15mm thick.

Place each slice in a bun case. 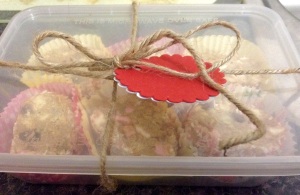 When I am giving these as gifts to people, I package them up nicely. These boxes and tags were bought in my local Pound Shop.

Sometimes, if I want to make them “girlie”, I sprinkle some edible glitter in through the coconut. I usually buy this in Poundland, I love their Jane Asher range. 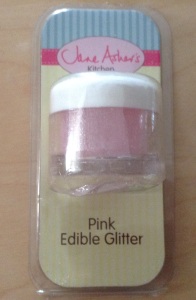 If you like other ingredients, such as chopped nuts, you could add these as well.

The only limit is your imagination.

P.S. I have recently added a step-by-step ‘no-bake’ recipe for Chocolate Bird’s Nests  that you may also be interested in. Click here  to go straight to the page.

Thank you for visiting my blog.

Before I joined the ranks of the bereaved parents, I think I naively imagined that when a parent lost a child, they would somehow fairly quickly turn all of their attention to their surviving children.

What I didn’t understand is that when your child dies, you become so consumed with yearning and longing for the child that you have lost, that it’s almost like you now love them even more than when they were alive.

You become desperate to hang on to your relationship with your now dead child, desperate to somehow or other preserve their memory.

I’m part of a private facebook group of parents bereaved by cancer. Some time back we were discussing our feelings on clearing out things belonging to our child after they had died. As one would expect, opinion was divided between those who (like me) had cleared out and given away some of their belongings and others who felt the need to keep everything exactly as it was when their child had passed away.

Then I mentioned the fact that I have kept all of Leah’s medication and dressings. Several parents responded to this by saying that they had to get rid of their child’s medication soon after their child passed away, or they would have used it to take their own life.

These parents have other children, but their emotional pain and overwhelming desire to be with their dead child was so great that suicide had become a realistic option.

Thankfully I haven’t felt suicidal since Leah died, but I do understand to some extent how these parents feel. It is so difficult to go on living after the death of one’s child.

One of the things that’s been very difficult since Leah died, has been for Miriam (our youngest child) and I to do things on our own together. When Leah was alive, it was never just Miriam and me. I almost always had a minimum of two kids in tow. 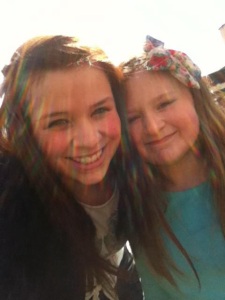 When Leah died, Miriam became like an only child. She hasn’t wanted to do things on her own with her parents and she has spent an awful lot of time alone in her room.

None of us ever wants to see our children suffer. Seeing the pain of grief and loss in the eyes of my “baby”, knowing that this is a pain I cannot fix, has at times felt excruciatingly painful.

The main reason why Miriam and I couldn’t go places on our own together, is that to do so would have been to constantly remind ourselves of Leah’s absence and that just felt too painful.

I was used doing things on my own with my eldest daughter, so that hasn’t been an issue. In 2012 she and I went on holidays together – she took me to London/Cambridge for 10 days as a special birthday treat.

Rachel is away at University now and has a part-time job as well. We love when she gets home for the weekend. My son is like someone who is surgically attached to his computer – he suffers separation anxiety if he has to leave it for any length of time.

Thankfully, during 2014, there were several occasions when friends accompanied Miriam and I to places like Portrush and Portstewart, so that we still got to do fun things together, just not on our own.

There were times when I asked her to go places on her own with me but she refused – she wasn’t ready.

Then, last week something happened, Miriam asked me if I would take her over town yesterday. We planned a girlie day together. I let her set the agenda.

On the way to town in the car Miriam said that she wanted to weed Leah’s grave and I replied that we had no gardening tools with us. She suggested that we got some in the Pound Shop.

In the gardening section of B&M Bargains Miriam found a planter in the shape of a shoe: “Oh Mummy, can we get this for the grave? Leah loved her pink converse!”

Miriam also chose some pretty windmills to add colour to the grave.

Then it was time for some clothes shopping – for Miriam.

When the shopping was all done we headed over to Ballyoan Cemetary. Miriam started weeding the grave. I was dispatched with an empty milkshake bottle to get water for the plants, from the tap which is half way across the Cemetery.

I stopped to chat to people along the way, so Miriam had most of  the work done by the time I got back. We assembled the windmills and she decided where to place them.

No shopping trip is complete without the obligatory McDonald’s: 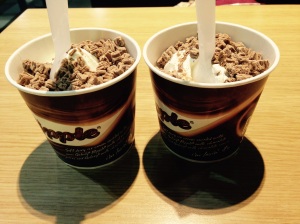 Our last stopoff was was to visit Miriam’s wee cousin.

So, exactly fourteen months from the day when Leah went to be with her Heavenly Father, Miriam and I enjoyed our first proper mother daughter day out together and it felt good.

Every year, soon after the Christmas lights were switched on in Derry, it was always a treat to head over town after dark with the kids to admire the lights – driving around the streets and gazing in wonder at how different the City Centre suddenly looked.

This year however is so different. I have so much pain in my heart. Everything to do with Christmas just takes me back to this time last year and when our Christmas ended so abruptly on Friday 27th December. The day that resulted in the chimes of Christmas bells being replaced with the chimes of the ICU monitors.

Those monitors to which Leah was attached seemed to alarm constantly – telling me what I didn’t want to hear – that despite the best of medical care – despite every treatment they could think of trying – Leah’s lungs were failing.

This evening I went into the City Centre briefly on my way elsewhere. As soon as I got out of the car I noticed the Christmas lights and a wave of grief swept over me. I was reminded once again of the incompleteness of our family.

I headed into Poundland and quietly sobbed my way round the aisles. I quickly found and paid for the items that I had come for and headed back to the car.

The Christmas lights looked so beautiful. They reminded me of year after year of bringing our children over to see them. I used to be as excited as they were.

When the children were really young, we used to head up the Culmore Road and also go to Hatmore Park, to see some houses that were amazingly decorated like the houses you see in films on TV – it used to be part of our Christmas ritual as a family. Horace used to bring the camcorder in those days, to record the children’s wide-eyed wonder and excitement.

Since Leah died I’ve re watched all our family videos, lingering over precious memories untainted by sorrow. It’s so lovely to have these memories. Every photo, every piece of video footage, is now so very precious.

All I can say is, I’m glad that Miriam and I are being given the opportunity to go to Lapland for the day this December, because otherwise that poor child would be seeing very little “Christmas cheer” from her mother!

I love this song from Michael Card:

Come Lift Up Your Sorrows

(Chorus)
Come lift up your sorrows
And offer your pain;
Come make a sacrifice
Of all your shame;
There in your wilderness
He’s waiting for you
To worship Him with your wounds,
For He’s wounded too.

He has not stuttered, and He has not lied
When He said, “Come unto me, you’re not disqualified”
When your heavy laden, you may want to depart,
But those who know sorrow are closest to His heart.

In this most Holy Place
He’s made a sacred space
For those who will enter in
And trust to cry out to Him;
You’ll find no curtain there,
No reason left for fear;
There’s perfect freedom here
To weep every unwept tear.

Unauthorized use and/or duplication of this material without express and written permission from this blog’s author and/or owner is strictly prohibited. Excerpts and links may be used, provided that full and clear credit is given to Victoria Whyte with appropriate and specific direction to the original content.
Loading Comments...
%d bloggers like this: