Today I read the blog post of a good friend and fellow blogger and my eyes were drawn to this photo. She didn’t say which hospital in N. Ireland that the photo had been taken in but my heart was already pounding in my chest and my eyes were filled with tears, before my mind had even formed the words Belfast City Hospital. 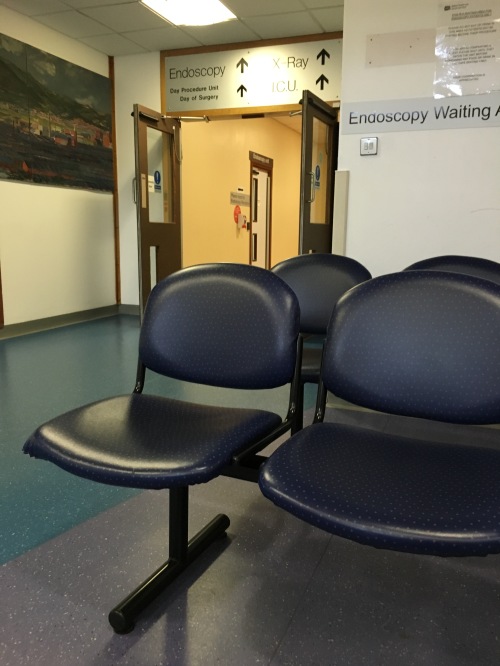 The ICU where Leah was treated for 2.5 weeks before she died had no Relatives Room within the Unit and worse still – from my perspective – no Visitors/Relatives Toilet. Every time (day or night) that I needed to use the toilet, I had to leave the ICU and make my way through the long convoluted corridors of the hospital, to the public toilets in the main Foyer, via the double doors in this picture. These toilets were very busy and in constant use, therefore the hardworking hospital cleaning staff were unable to maintain them in pristine condition, although they were cleaned regularly. I detested using them as I was terrified of carrying an infection back to my immunocompromised and critically ill daughter.

Each time on my return to the ICU I had to ring the bell first at the outer door and again at the inner door, then wait to be granted permission to ‘visit’ my desperately ill daughter, who disliked me leaving her. This was the hardest part, knowing that Leah was waiting on me to return, but not knowing if I would be allowed in, or if I would be asked to wait in the corridor.

I quickly learned that the best thing to do was to restrict my food and fluid intake so that I NEVER voluntarily left ICU – the only occasions that I left were when requested to do so. Unfortunately, due to the policies and procedures of ICU these occasions happened regularly throughout the day. I then sat on a hard plastic chair in the corridor outside ICU, waiting anxiously for that precious moment when I would be allowed back into Leah’s cubicle.

I found that having a cup of hot cinnamon milk for breakfast filled me up and didn’t make me run to the toilet. At lunch hour I often had a plain bun and a soft drink, like 7up. On one occasion during doctor’s rounds, an ICU consultant lectured me on the importance of looking after my health so that I could take care of Leah. A few days later when I was sitting  in the corridor outside ICU, this same consultant came along and noticed me eating a bun. He called over to me “Look at you eating junk food. That’s exactly what I was talking about.” I flinched with embarrassment and the indignity of it all, but I managed to hold back the tears until he was out of sight. I don’t honestly think that he meant to be cruel or unkind, I just don’t think that he had any idea of what it’s like to be the mother of a dying child and to feel as if all of your dignity and privacy has been stripped away, along with so much else.

Eventually, a few family members started to bring me in home cooked food some evenings, which I really appreciated. In order to get some measure of privacy,  I ate it while sitting on these softer seats in the Endoscopy Waiting Area, instead of in the corridor outside ICU. Any time that I needed a private space to talk to visitors or to my Support Worker from the NICFC  we also came and sat in this Endoscopy Waiting Area adjacent to the hospital foyer. This is where I sat on Monday 13th January 2014 as we discussed Leah’s end of life care and I shared my distress and frustration at having been told that we had ‘no options‘ – I had been told that Leah was going to die in ICU there in Belfast City Hospital even though we had said that we wanted to take her home or to the Children’s Hospice.

Some weeks after Leah died I approached the management of Critical Care in the Belfast Trust  regarding various issues that I wanted addressed. I assured them that I had no issue whatsoever with the medical care that Leah had received as I knew that everything possible had been done to try and save her life. I referred to the kindness and compassion shown by so many of the staff who had cared for my daughter.  I deliberately did not address issues pertaining to the fabric of the building, lack of facilities etc. as I knew that their likely response would be ‘lack of funding‘. I assured them that most of the changes that I wished to discuss wouldn’t cost any money to implement. One of these changes was that I wanted for parents/carers of teenagers and young adults being cared for in Critical Care to be allowed to come and go freely. I said that it was an absolute disgrace that there had been some days when I felt that I had spent more time sitting in a hard plastic chair in a hospital corridor than at the bedside of my dying child.

In December 2015 I received an email from a senior member of staff that contained the following sentence: when we had a 16–year old in the (Intensive Care) unit a few weeks ago, her parents came and went freely without an eyebrow being raised – it was just accepted as the right thing to do.

I cried when I read this – tears of sadness for what we didn’t have when Leah was dying – but also tears of enormous joy and relief, knowing that no other families will endure the enforced separations that I experienced.